The superhero Parthenon is overwhelmingly white and male.  It is not a surprise then that the comic book movie era Hollywood is currently in repeats this trend.  Kevin Feige, Marvel Studio’s president, promises us (kinda) a Captain Marvel movie by 2016.  And all I have to say to that is… Thanks… And I mean that in the least enthusiastic way possible while still kind of being interested.
END_OF_DOCUMENT_TOKEN_TO_BE_REPLACED

Amy Winehouse was found dead on Saturday in her home in Camden, North London.  I fell instantly head over heels for her brassy, blues and jazz infused voice that sang songs of pain and frustration, lust and love.  What saddens me more than the loss of this talent to the world, are the reactions from media outlets and individuals who blame Winehouse for what has happened to her (even as the autopsy report is pending).

The news of her death sparked immediate head shakes of disappointment in the artist’s “wasted promises”, finger wags and twitter tags of “I knew it,” and for a few of us, feelings of deep sadness in the loss of life, a life which blessed us with music that spoke to our souls.  Known as “the crazy Amy Winehouse” to classmates, what seems clear both from the blues in her voice and the lyrics that she wrote was that melancholia had been a part of her life for a very long time.   The numbing affects and addictive nature of drugs and alcohol were an unfortunate combination which led to her inability to keep up the unrealistic endurance required to live life under the scrutiny of millions.  They also inhibited her from getting treatment, but I never once counted her out.  I had hoped she’d make it through the fire, like Chaka Khan has.

Though I cannot imagine Winehouse’s demons, in my life I have felt lost and depressed; have lived through times where I had no home, no anchor, and was lonely.  Having felt all those things, I know that it is only a blessing that I made it out, both physically and emotionally, intact.  That is not the experience of a great many of us, some of whom numb their unbearable pain with whatever will do the trick.  I feel blessed to have come out of my experience with understanding for those who live with the kind of depression that makes their body ache on the inside and that makes it nearly impossible for them to experience joy or happiness in the way that others do; understanding for those who live with addictions which are as mental as they are physical.

Thank god tears dry on their own… 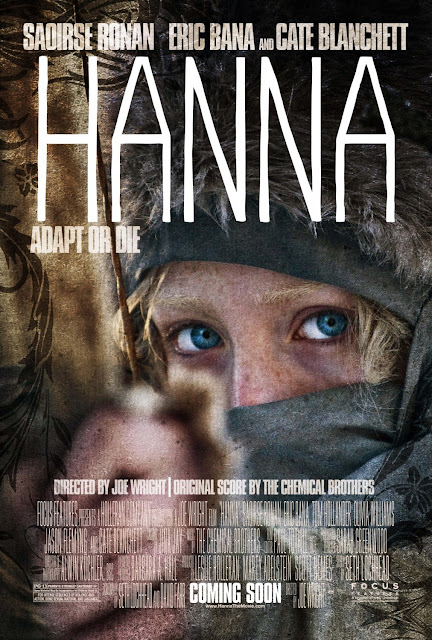 How can you go wrong with Cate Blanchett?

There was something rather unsettling about not really understanding what was going on in the movie, but I enjoyed that. The acting was superb, Cate Blanchett created an absolutely devilish and obsessive character who reminded me of the Brother Grimm’s Queen in the story of Snow White and the Seven Dwarfs. The fairytale quality of the film makes this comparison quite palpable. Though the story itself was a little derivative–a little Dark Angel (Jessica Alba’s breakout role), a little Salt (Angelina Jolie’s latest action flick)–I liked the fact that our heroine was a 14 year old girl played by the beautifully strange looking, Sanoirse Ronan.

Feminist Reaction to the Audience’s Reaction

There is a homoerotic scene in the film which I won’t spoil, but which brought out the closet-homophobes (those are people say things like “ewww, that’s soooo gay” in a dark movie theater, but wouldn’t dare say it when people could see their face). Though I wasn’t surprised, I often hear folks say that homophobia is a symptom of the previous generation… but that’s just not true. Even in a scene that could be read a number of different ways, that perhaps wasn’t even meant to be “gay,” people still have nasty visceral reactions to anything they perceive as non-normative, anything that doesn’t fit a heteronormative script. Now you have to go see it to figure out what I’m talking about right?

Go see it in theaters because all good action movies are better that way.

If your baby dolls kicked G.I. Joe’s fanny, then you’ll like this movie.

I really enjoyed this movie. I can’t say that there are many action heroine movies with women, who get to be sexy, but not have the camera linger over there bust line. This was a movie about the structures that men had created to exploit the minds and the sex of women and the lengths those women would go to escape, and the inspiration that they needed from one another to make it possible. The women in this movie had all the tools they needed to get out of the structures that bound them: they had the brains, they had the tools, and they had the skill. Their fantasy world, like mine growing up, was one where baby dolls shot G.I. Joe’s guns and rode around in an Apache with butterfly stickers on it.  The interesting part of this movie though is that their fantasies had power.  It gave them a way out in the real world. They had imagine a place where they were free, where they were in control of their fates, in order to do it make it possible in real life.

It was imaginative. It was layered. And the action was well choreographed. Those girls shot machine guns like no other.

I suppose, for some feminist, any depiction of women in anything other than a pair of jeans is hypersexual, and thus problematic. Not for me, and not for Celine Parreñas Shimizu. In her book the Hypersexuality of Race, she argues that those participating in “the study of hypersexual representation can unconsciously get caught up in an agenda of moralism and propriety if sexuality is not defined more precisely.” (2007: 18). For sure, these women are sexualized, but in the context of the film, they don’t have control over the way they look because they’re trapped in an insane asylum/brothel against their will. Despite that, Zack Snyder and the producer’s costume choices were tasteful. In their fantasy world, the women wore everything from armor and fishnets, leather and Japanese school girl outfits, heels and tall boots, and why wouldn’t they?  What kind of things do women fantasize about?  Too few feminist who ask questions of sexualized representations of women do work on women, sex, and pleasure to answer that question sufficiently.  Women should get to wear whatever they want, shot however big a gun they want, and if they don’t smoke, they should be able to suck on a lollipop instead of smoke a cigar.  Go see it.